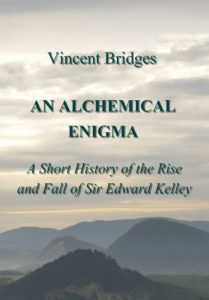 EDWARD “TALBOT” KELLEY STEPS from obscurity onto the stage of the Elizabethan era on the 8th of March 1582, arriving at Mortlake in answer to the fervent prayers of Dr. John Dee, Queen Elizabeth I’s mentor, court astrologer, creator of the idea of “The British Empire” and reputedly the most learned man in Europe.

Through the next few years, Edward Kelley would go through what seems, to modern eyes, an almost miraculous transformation:from the hard-to-manage crystal gazer of John Dee’s diary to the alchemist who apparently can change base metals into silver or gold, and who becomes a Knight of the Holy Roman Empire, given lands and honors by Emperor Rudolf II himself. Then almost as rapidly, Kelley falls from grace and dies trying to escape from prison at Hnevin Castle.

Was Kelley a charlatan, as some over the years have labelled him? Or could he rather have been a brilliant and misunderstood visionary whose legacy catalyzed the Rosicrucian Enlightenment in Central Europe, and which inspired some of the most admired literature of the late 16th and early 17th centuries? In this book Vincent Bridges gives us a fascinating and singular account of this enigmatic figure.